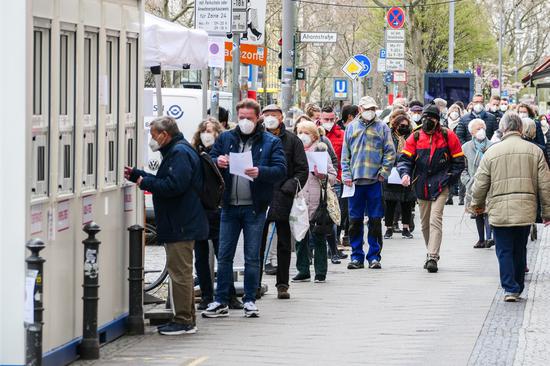 People wait for COVID-19 tests outside a test site in Berlin, capital of Germany, on April 12, 2021. (Xinhua/Stefan Zeitz)

Europeans are longing for outdoor gatherings and sunshine as the weather turns warm. This week, in some parts of Europe, people once again crowded streets and parks as governments started to gradually lift coronavirus restrictions.

As the number of new infections is still running high and problems surrounding travel certificate and other issues remain unresolved, experts warned a too hasty exit strategy might risk another spike of the virus and that coordination among European countries is also needed.

England became one of the first regions in Europe to end restrictions on non-essential retail. In England, all shops reopened from April 12, along with hairdressers, beauty salons and other close-contact services. Meanwhile, gyms, spas, zoos, theme parks, libraries and community centers can all open.

According to the British government’s four-step plan, restaurants and pubs are expected to be allowed to resume indoor service and see most rules on gathering outdoors lifted on May 17. All legal restrictions in England are expected to be removed by mid-June.

Starting from last week, restaurants and bars in Switzerland have been allowed to reopen their outdoor seating areas and restrictions on sporting and leisure activities of adults have also been partially lifted. But the government said additional relaxation of pandemic measures is unlikely before May 26.

Some countries opt for an approach that differentiates between regions with different risks of infection. In Germany, a nationwide “emergency brake” mechanism stipulates that areas with a seven-day infection rate above a certain threshold for three consecutive days will have contact restrictions and a night curfew in place.

Similarly, Italy has adopted a color code to evaluate the risk of contagion on the base of local coronavirus data. The country took a first decisive step towards a post-pandemic phase on Monday. Restaurants, bars, outdoor sporting facilities and museums were among the activities allowed to restart in the 14 “yellow” regions, which show a low risk of contagion.

France, on the other hand, is about to take smaller steps. It decided to end restrictions confining people to a 10-km radius of their homes from May 3. But the nationwide 7 p.m. to 6 a.m. curfew will remain in place until the epidemic is under control.

At a press conference last week, Dutch Prime Minister Mark Rutte explained what change has led to the decision to relax restrictions: “The answer is: not much, but just enough.”

More and more people are vaccinated, which means that fewer people will soon become ill, and the number of new hospital admissions is expected to decrease, Rutte said. “Opening up society step by step is not without risks. But the cabinet is also looking at the social and economic importance.”

Rutte’s remarks are representative of many European countries’ rationale behind exit strategies. While Europe’s manufacturing sector gradually recovers thanks to a strong global demand, the service sector has been repeatedly hit by the on-again, off-again closures.

In southern European countries where the tourism industry plays a key role, calls for reopening are loud. Greece last week lifted the self-quarantine requirement for travelers arriving in the country from the European Union (EU), Britain, the United States, the United Arab Emirates, Serbia and Israel. Its government had announced earlier this spring that it was preparing to reopen the country to tourism on May 14.

The ongoing vaccination campaign also lends support to the governments’ moves to reopen. After a sluggish start at the beginning of the year, the EU’s vaccination rollout recently sped up.

European Commission President Ursula von der Leyen said Friday that the goal to vaccinate 70 percent of EU’s adult population could be achieved by the end of July instead of late September as had been previously predicted.

As of April 21, more than 33 million people in Britain had been given the first jab of the coronavirus vaccine, official figures showed. But experts have warned that Britain is “still not out of the woods” amid concerns over new variants, particularly those first detected in South Africa, Brazil and India, and the third wave of pandemic on the European continent.

“Fully opening up society is best done when more than 85 percent of the population are vaccinated … To achieve this, all age groups should benefit from the vaccines,” said Martin Hibberd, professor of emerging infectious disease at the London School of Hygiene &Tropical Medicine.

In Portugal, most of the country has proceeded to the third stage of de-confinement, except for a few municipalities and counties reporting high infections.

“As long as there is no vaccination coverage for groups at risk of 90 percent to 100 percent,” there is always a danger that may lead to hospitalizations and deaths, warned virologist Pedro Simas.

Meanwhile, Europe is mulling a Digital Green Certificate that could hopefully enable travel by summer, although technical details and issues concerning data protection and privacy remain to be discussed.

Depending on the infection curve and national developments, steps of reopening will be taken at different speeds and scopes in Europe, researchers from Deutsche Bank pointed out in a paper earlier this month. Therefore, European coordination of exit strategies is important.

The European Commission called for early notification and coordination of national steps in a document titled Joint European Roadmap towards lifting COVID-19 containment measures, which was published in mid-April.

“The current situation in Europe against the pandemic is generally moving in a favorable direction,” said Lu Mengji, professor of virology at the Institute of Virology, University Hospital of Essen in Germany.

The challenge ahead is “to convince the population to continue taking necessary precautions during this transition period and to avoid an excessive number of patients requiring hospitalization,” Lu said.