In 2014 Rodger, a 22 year old man who billed himself a “catch” and a “nice guy” and a “supreme gentleman,” who also resented the fact that he was still “a virgin,” stabbed three men to death a total of 134 times before he went on a shooting spree, driving to a sorority house and killing three additional people and wounding another 13, before killing himself.

Rodger wrote a lengthy 138-page manifesto explaining his “rationale” for his crimes, leaving behind a YouTube video where he said:

For the last eight years of my life, ever since I hit puberty, I’ve been forced to endure an existence of loneliness, rejection and unfulfilled desires. Girls gave their affection and sex and love to other men but never to me. I’m 22 years old, and I’m still a virgin. I’ve never even kissed a girl. I have been through college for two and a half years, more than that actually, and I’m still a virgin. It has been very torturous. […] All because girls have never been attracted to me. In those years I’ve had to rot in loneliness. I do not know why you girls aren’t attracted to me, but I will punish you all for it.”

Rodger is neither the first nor the only man to believe the cause for his loneliness was women being too “stuck up” to see the “value” in him. He, and many like him, are “incels.” Saint Elliot, as his more ardent fans refer to him, has inspired copycats who have taken lives, too.

Short for “involuntary celibate,” an incel started out as merely being people—gender non-exclusive—who wanted romantic relationships but couldn’t get them. Alas, nowadays it is much different: now, we use the term to define a man who openly and outwardly resents the most desirable female members of society, and those women’s refusal to sleep with them.

Stroll around their social media playgrounds and you see phrases like “Society has become a place for worship of females and it’s so fucking wrong, they’re not Gods they are just a f-cking c-m dumpster,” or “Our whole lives we’ve had to endure the pain of being so physically repulsive to females that they’d never even consider giving us a chance. We are actually so genetically inferior that they HATE us. They need to suffer […] Their hypocrisy is a crime [punishable by] torture for the rest of their slutty lives,” or even the all too common one that plays out on street corners every day: “bitch.”

For years, self-identified incels and members of the “men going their own way movement” (MGTOW for short) attacked my comments section, berating me and the women who commented here (before I closed the comments section), calling us all kinds of slurs and insults.

A screenshot from a comment left on my blog several years ago, a man who reeeeeally wanted us to know how little we were worth

But it’s more than wanting to remind us that we “are nothing, have nothing, and bring nothing to the table.” It is also “…so how dare you think you can deny me anything I want?”

As Jia Tolentino put it, “Incels tend to direct hatred at things they think they desire; they are obsessed with female beauty but despise makeup as a form of fraud. Incel culture advises men to “looksmaxx” or “statusmaxx”—to improve their appearance, to make more money—in a way that presumes that women are not potential partners or worthy objects of possible affection but inconveniently sentient bodies that must be claimed through cold strategy. […] When these tactics fail, as they are bound to do, the rage intensifies.”

What does it mean to be a woman who is surrounded by men who say and do these kinds of things? What kind of sense of self do you build when it is formed in close proximity to men with these kinds of thoughts and feelings hiding underneath? Who do you become when you are raised around this, around a man who negs a woman to the point of manipulating her into believing she could never be or do better? Could you even recognize it for the harmful thing it is?

Weight loss has always been associated with beauty, whether I agree with that or not, and we’ve acknowledged here before that beauty is unfortunately associated with social stature for women. Successfully losing weight, feeling good about oneself is what makes a woman “stuck up,” newly poised to reject men who they might’ve given a chance before. The more “attractive” you are, the easier it is for you to gain access to sought-after promotions, positions, and—frankly—relationships, and the less likely you are to need a man. If more women are figuring out how to become more “traditionally attractive,” that’s more women who don’t have to endure the kinds of men who might hide these kinds of thoughts and feelings behind a “good guy” approach. They have better options now—including the ultimate option of simply being happy and single.

I think about the woman who, after turning down a man’s advances, was bashed upside the head with a skateboard. Or the woman who, after declining a man’s advances, was followed into a parking garage and sexually assaulted, then murdered. I think about men who, like Rodger, pursued women often; men who, like Rodger, could never convince a woman to actually take them seriously; men who, like Rodger, believed the only real response to this is violence. That is something we see in our community far too often, and we all know the prices paid for their entitlement. This falls right in line with incel behavior.

Last week, it was reported that Megan Thee Stallion, a rapper well known for her dancing and—ahem—titanium knees, was shot by another rapper after a disagreement between the two. The man allegedly shot her in the feet. He shot a dancer. In the feet.

“On Sunday morning, I suffered gunshot wounds, as a result of a crime that was committed against me and done with the intention to physically harm me,” she wrote in an IG post. Page Six had a bit more info:

“Tory fired the shots from within the vehicle while Megan was outside trying to leave,” a source exclusively told us on Thursday. “There is video and the police are investigating. This is a case of a man physically harming and abusing a woman.” [source]

Now, this isn’t about Megan. This isn’t even about the loser who quite possibly shot her. This is about these losers: 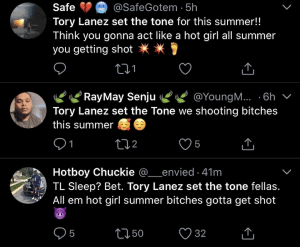 Being a “hot girl” having a “hot girl summer” was always understood to be about feeling yourself, feeling good about yourself, a body image-centered sense of self-determination. In these screenshots, we’re watching Black men presume that Megan was shot because she was being “a hot girl,” necessary to put her in her place. That’s where we are.

Regardless of whatever really happened, the inner incel just jumped out of these men.

The archetypal incel is white and male, with a predictable bend towards white supremacy. However, I have a theory—perhaps this picture, this description, is incomplete. What once was simply a collective of people trying to accept their late bloomer status has morphed into more than angry male virgins, but men who resent the self-determination and agency of women, and believe they should be taken down for it.

And those men are not always white.

I think our understanding of an “incel” is too narrow. Perhaps, it’s not merely white men who are “angry virgins.” Perhaps we need to consider that “incel” is, when looked at through a lens that doesn’t merely fixate on white men, a term that includes a lot of the behavior that we see displayed in our community every day. Perhaps “incel” is now the catch-all phrase for any men who want to enact violence against women, for reasons very disturbingly expressed by Rodger: “If I cannot have it, I will do everything I can to DESTROY IT.”

Perhaps we need to take it seriously in our community. Call them out. See it for what it is. And keep your distance.