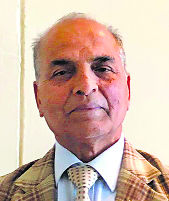 It was in April 1972, while I was posted at Shillong, that a message came from the Army HQ about the visit of General KM Cariappa, the first and the last Indian Commander-in-Chief of Independent India. One had heard about him as the founding father of the Indian Army; an admirable officer and a gentleman, moulded in the British tradition. More than anything else, I had read a booklet titled ‘Officer’s Code of Conduct’ issued by the Army HQ on his orders. It was thus a great honour and a matter of pride to be detailed as his liaison officer.

Accompanying the GOC, we received the former Army Chief, who retired from active military service in 1953, at the Guwahati airport. Tall, lean and handsome, he was immaculately dressed in a morning suit, with a felt hat. Shaking hands with him sent a wave of warmth and blessings.

General Cariappa, affectionately known as Kipper, a name given by a British officer’s wife, was visiting Guwahati and Shillong as president of the Ex-Servicemen League. He addressed a rally and took stock of the problems faced by ex-servicemen and their families. Some were living a retired life in remote and inaccessible areas of the North-East, and there were those whose financial condition was miserable. He took notes personally and after a quick working lunch, we drove to Shillong.

At a dinner party organised in his honour, he amused us with anecdotes. As a young officer in the British army, he was frequently posted from one regiment to another, then took over as the CO of 1/7 Rajput; as the western Army commander, he planned and executed operations in Jammu and Kashmir in 1947-48, saving Poonch and also Kargil and Leh as he bulldozed his way in moving forces to Ladakh across the Zojila.

As he rubbed shoulders with Defence Minister Baldev Singh and Pandit Nehru, the appointment of C-in-C was changed to COAS (Chief of Army Staff) and the new appointments of Chiefs of Air and Naval Staff created.

A man of principles, he ensured inclusivity in recruitment and kept the Indian Army apolitical; he did not accept soldiers from the disbanded INA even though he introduced their salutation, ‘Jai Hind’. During the 1965 war, when his son, who was in the Air Force, was taken prisoner, he refused the offer made by Pakistan’s President Ayub Khan to release him, saying his son should be treated like the rest.

Visiting the Military Hospital, he spent some light moments with the wounded soldiers who were convalescing after the Bangladesh war, bringing much cheer. Sharing his war experiences in Burma, he spoke about the beauty of Khasi and Jaintia hills and the bravery of tribes of all ‘seven sisters’. Besides many motivating superlatives, he emphasised on personal hygiene and took out a small bundle of a leaflet-like paper soap; handy and disposable. He also presented us an Indian version of Scotch whisky, the newly brewed Peter Scot.

The following day, he called on the Governor, BK Nehru, an equally distinguished man. Later, he met the Chief Minister, Williamson A Sangma, a tribal leader who had organised a civic reception for him where the music king of North-East, Bhupen Hazarika, sang ‘Rikksha chaloae ami dui bhai (we two brothers pull a rickshaw)’.

General Cariappa, on taking over the reins of Indian Army in 1949, instituted the day as Army Day and was given the honorary rank of Field Marshal on January 15, 1986. He breathed his last in 1993, leaving behind a unique legacy of leadership — discipline, character and selfless service to the nation.