“I’ve been a tomboy my whole life,” said Turnbull, 34. “I just learned how to do makeup this past year.”

Born and raised in Hayden, Turnbull was chosen from 18 finalists representing the state of Idaho.

It’s not all about physical beauty. The focus of the Mrs. Idaho pageant is philanthropy. Turnbull was drawn into competing because of the platforms she supports. And she clearly has a huge heart for people.

“It’s really the work you do on your own,” she said. “I like working hard with my community.”

The mother of a 3-year-old daughter, Joey, Turnbull is passionate about helping children.

“She says her mommy’s a princess,” Turnbull said.

As a board member for Children’s Village in Coeur d’Alene, Turnbull is a chairperson for their biggest annual fundraiser, taking place July 15. Helping with one charity, however, isn’t enough.

Unloading a car full of new sleeping bags, Turnbull explained that they’ll be going to Heritage Health to distribute to the homeless.

Getting educated on the homeless crisis in our community is imperative, she said, calling the issue “urgent.”

“I just want people to understand that even in a tourist town there is a whole other side,” she said. “I think my goal is to help open people’s eyes to that.”

Turnbull owns a home goods store in downtown Coeur d’Alene, and even that has become a hub for volunteer activity.

Turnbull has partnered with the organization for the past seven years.

“I love giving back to the community,” Turnbull said. “I make it a point to give back.”

The next step for Turnbull is to step onto the national stage this November in Las Vegas, where Turnbull will attend with her husband during the weeklong event. 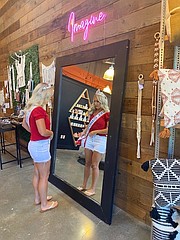