Who doesn’t like Mexican food? Seriously, is there anyone out there who doesn’t? Anyway, I know my family sure does. These beef and rice bowls are one of our busy weeknight favorites. And the kids are always excited about a guacamole snack. And if we can have taco-truck-delicious tacos at home, then it’s a definite win.

Tacos al pastor are a great mix of tangy, salty, sweet, and spicy. I marinate pork in a sweet and spicy marinade, cook it, and shred it to put in tacos. My kids give it two thumbs up and say you should give it a try.

What Are Tacos Al Pastor?

Seriously though, traditional tacos al pastor don’t resemble shepherd’s pie at all. The meat is more like a Mexican version of Lebanese shawarma or Greek gyros. Toss the meat in a tortilla with some other toppings and you have tacos al pastor.

To make it, marinate pork in a pineapple and adobo pepper marinade for at least an hour. Then choose a cooking method. The pork for traditional tacos al pastor is roasted on a spit.

I don’t have a spit that I roast meat on. Most home cooks don’t. But there are other ways to get a similarly delicious flavor at home. These are the three methods I’ve used:

One of my family’s favorite things about tacos is that everyone can top their own however they like. I put out different topping options depending on what I have on hand and what’s in season. Our fish tacos and fish taco salad are different every time we have them.

We don’t usually eat a lot of grains, so sometimes when we have tacos we serve them in lettuce leaves. I keep thinking about making my own tortillas though. 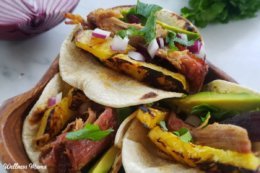 Tacos al Pastor are a blend of sweet, spicy, tangy, and savory. Top with pineapple, onion, and cilantro for a crowd pleasing meal.

To make the marinade:

You can sub chicken thighs for the pork if you’d like, but adjust the cooking time accordingly.